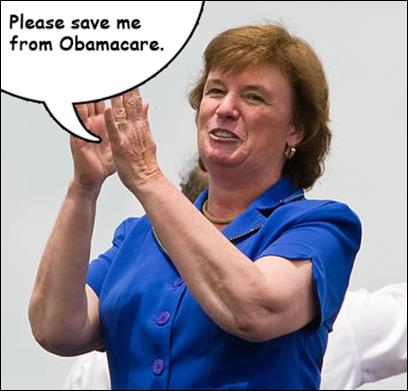 “A conversion of convenience.” That’s how the New Hampshire Union Leader describes Carol Shea-Porter’s transparent attempts to distance herself from the same health care law she voted for and championed.

And while Carol Shea-Porter may be praying to avoid the consequences of her Obamacare, thousands of Granite Staters have no salvation from a law forcing them from their health plans, doctors and hospitals.

One thing is clear: When even an extreme ideologue like Carol Shea-Porter is running from Obamacare, Granite Staters should be rightfully concerned about just how damaging Obamacare will be for them.

Wait, who is telling untruths about Obamacare?

Rep. Carol Shea-Porter, who voted for Obamacare and has championed it ever since, is trying this week to distance herself from the wrenching insurance changes it is forcing on Granite Staters. How cute.

The N.H. Republican Party has put out a radio ad that depicts a man losing his doctor because his insurer, Anthem Blue Cross-Blue Shield, narrowed its provider network because of Obamacare. Though Anthem did this, Shea-Porter says the ad is “false” because people can keep their insurance and their doctors thanks to delays announced in November. Well, well, well.

In October, Anthem, the only health insurer participating in New Hampshire’s exchange, issued cancellation notices to more than 22,000 Granite Staters on the individual market. The Affordable Care Act gave these people until Nov. 15 to renew their plans or be forcibly upgraded to more extensive, generally more costly Obama-approved plans. Shea-Porter knew this day was coming. In 2010 she said on WMUR-TV that if you like your employer-provided plan, you can keep it. (Obamacare is forcing people off of their employer-provided plans, too, which Shea-Porter appears not to have known.)

In a series of delays announced last month, the Nov. 15 deadline was pushed back to Dec. 1, then to Dec. 16 — next week. So although people did receive cancellation notices, they have a brief window in which they can renew their old plan.

But those delays are extralegal administration decrees that actually violate the law that Shea-Porter voted for. So is President Obama’s announcement that insurers could keep offering the old plans (ones made illegal under Obamacare) for another year if they chose to (Anthem is not). The law Shea-Porter helped pass kicked millions of people off of their insurance in November. Only after those cancellation notices went out did she suddenly support letting people keep their current plans for just a few weeks longer. In Christianity, that is called a conversion of convenience.