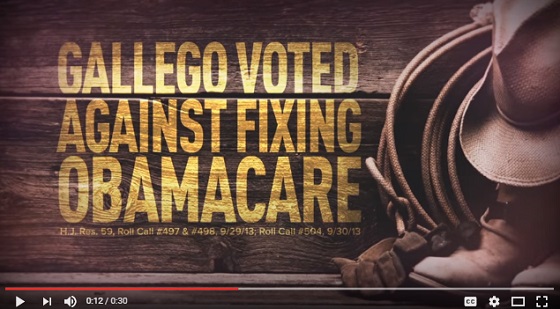 “Premiums skyrocket and options diminish for Texans under Obamacare, yet Pete Gallego continues to support it,” said Ruth Guerra, spokeswoman for CLF. “Worse, Gallego had the opportunity to make health care more affordable but instead chose to take care of himself by supporting taxpayer subsidies for his health care. Texans can’t afford a self-serving, career politician like Pete Gallego.”

The TV ad will air on broadcast, cable and digital in the San Antonio and Midland-Odessa media markets beginning Friday, October 28, as part of CLF’s $2 million independent expenditure campaign in TX-23. In 2014, CLF and its sister organization, the American Action Network (501c4), spent $1.6 million in the TX-23 congressional race, supporting Will Hurd’s victory over Pete Gallego.

ANNCR: Pete Gallego sure did love being in Congress.

And if you look at what he did there, it’s no wonder.

Gallego voted to keep taxpayer subsidies for his own health care.

But voted against making Obamacare more affordable for you.

Now, health premiums for Texas families are skyrocketing up to 60 percent.

Political insider Pete Gallego took care of himself in Congress, not you.

We just can’t afford to send him back.