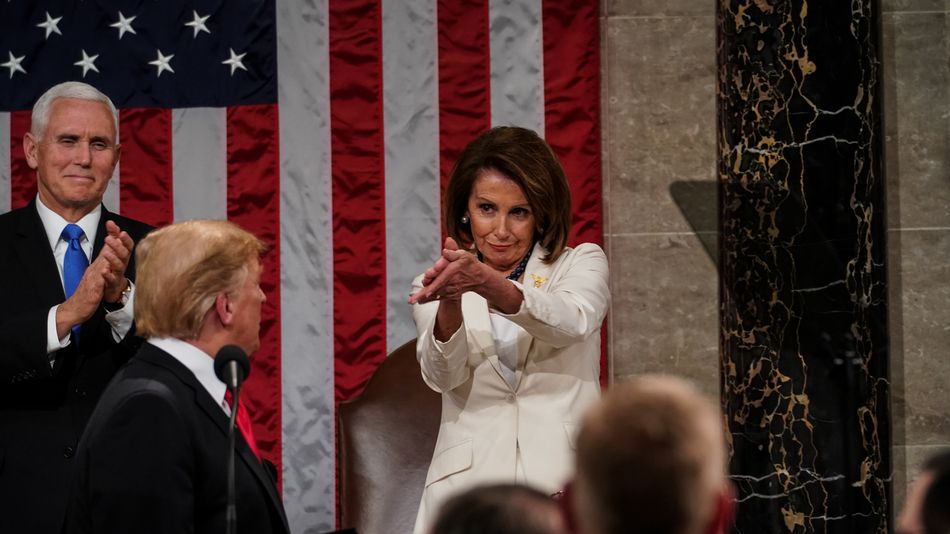 House Democrats’ rush to impeach President Trump continues to backfire in the most spectacular of fashions. Politico reports this morning that impeachment is boosting GOP efforts to take back the House by jolting recruitment, spurring new candidates enter races against vulnerable Democrats, creating new enthusiasm among the GOP base, and bolstering fundraising in key districts across the country.

Guess the Democrats should have thought this whole thing through a little more before betting the House … literally … on their obsession with overturning the 2016 election.

House Republicans have been struggling mightily to recruit candidates in key battleground districts, given the likelihood of serving in the minority, possibly with a new Democratic president.

But the Democratic impeachment drive is delivering a much-needed jolt to their efforts to retake the chamber.

Once-wary potential candidates are preparing to come off the sidelines, according to party recruiters, and the GOP’s small-dollar donor base is stepping up to help the party compete against Democrats who are practically awash in money, according to nearly a dozen interviews with Republican Party officials and some prospective contenders themselves.

“It certainly sparks something in you when you see this bombardment against our president,” said Dale Crafts, a former state representative and paraplegic businessman who plans to launch a run this week against Democratic Rep. Jared Golden of Maine.

Seizing on impeachment and seeking to protect President Donald Trump, GOP outside groups over the past week have launched a seven-figure TV ad blitz in targeted districts and rolled out fundraising initiatives to help bankroll the eventual Republican nominee in some 20 Trump-won seats. They’re also cranking up efforts aimed at building donor lists.

The infusion of energy comes at a crucial moment. A rash of summer retirements has undercut the GOP’s message that the majority is within reach, and the National Republican Congressional Committee has trailed the House Democratic campaign arm in fundraising every month this cycle. Meanwhile, the NRCC is approaching the final stretch to lure top-tier recruits to run in the most competitive districts that will decide the majority.

Party strategists said they are already beginning to see an impeachment-fueled surge in base enthusiasm — evidenced by an uptick in fundraising and interest from potential candidates — that they believe can animate sleepy races in the 31 Democratic-held seats that Trump carried in 2016.

Republicans’ recruiting map still has some notable holes. No Republicans have filed to run in four Trump-won seats, including those held by Reps. Andy Kim in New Jersey and Chris Pappas in New Hampshire. And operatives are still actively recruiting in at least nine others in the hopes of drafting more formidable contenders, including in seats held by Reps. Haley Stevens of Michigan, Elaine Luria of Virginia, Angie Craig of Minnesota and Matt Cartwright of Pennsylvania.

Since House Speaker Nancy Pelosi formalized an impeachment inquiry last month, the NRCC has fielded calls from prospective candidates who had previously shown little interest in 2020 bids in offensive targets in Michigan, Wisconsin, Virginia, Pennsylvania and New Jersey, according to officials involved in recruitment.

Democrats’ move toward impeachment was part of what helped persuade Crafts to challenge Golden for his rural Maine seat that the president won by 10 points, though the incumbent is one of just eight House Democrats who has yet to back the inquiry. Eric Brakey, the 2018 GOP Senate nominee, is also running, but Crafts said others encouraged him to enter, including former Gov. Paul LePage.

The broadcast campaign aligns with some key recruitment opportunities for the GOP. The Republican National Committee is running over $2 million worth of broadcast ads in at least a dozen districts, according to data from the ad tracking firm Advertising Analytics. The RNC made some of its biggest buys in districts held by Luria, Craig and Cartwright.

It’s a tactic that worked before: The House GOP campaign arm ran ads as part of its “Young Guns” program in mid-2009 in the Missouri district of longtime Democratic Rep. Ike Skelton as part of an attempt to signal its seriousness about the district to prospective candidates.

“We could not get a single thing going on in that race.” said Guy Harrison, the NRCC’s executive director in the 2010 cycle. “We ran Young Guns ads there. We got three calls within the next week, and that race came online.” One of those calls was from Vicky Hartzler, who beat Skelton and still holds the seat.

The impeachment pushback has also coincided with the start of the fourth fundraising quarter, giving Republicans a chance to plug their recruiting gaps. Kate Gibbs, a former state legislator who now works for a politically influential union, will soon announce a bid to oust Kim in New Jersey. And Lisa Scheller, a recovering heroin addict-turned-president of a manufacturing company, is readying a run against Democratic Rep. Susan Wild in a Pennsylvania district Trump lost by 1 point, according to sources familiar with their plans.

But any new candidate will enter those races at a massive monetary disadvantage. Kim, for example, had already banked $970,000 by the end of June.

Democrats’ financial dominance — about two dozen freshmen had more than $900,000 in the bank as of June 30 — has bolstered their chances of keeping their majority. Only 11 of the 31 Democrats in districts Trump carried in 2016 had a challenger who had raised more than $100,000 by the end of the second quarter.

Impeachment could provide a means to play catch up. The RNC piloted a successful joint fundraising initiative last month with an email blast that directed supporters to a page where they could split a donation between Trump and a fund for the eventual nominee who will take on Democratic Rep. Elissa Slotkin, a swing-seat freshman in a Michigan district that the president carried by 7 points.

The push has so far netted some $250,000 for Slotkin fund, according to the RNC. Slotkin got her first challenger a week later in state Board of Education member Nikki Snyder. The RNC has since tweeted out digital ads with links to nominee funds in some 20 other Trump-won districts that it plans to promote on social platforms.

“Over the next few months, they’re going to be sending emails and tweets and doing marketing and advertising to fill them up,” said Gerrit Lansing, the president of WinRed, which is collecting the funds. “It’s a just a question of how much money they want to put in and attention they focus to it, but they certainly have the ability to raise millions of dollars in each of those.”

The NRCC is also running digital acquisition ads in over 20 districts aimed at amassing email lists, which can be delivered to nominees after primary season ends.

From a messaging standpoint, GOP strategists said impeachment provides an opening to cast the Democrats as partisan players. Many of them ran in 2018 as centrists who could work with Trump on bipartisan issues and picked up key crossover support on their way to winning red-leaning districts.

“Republicans want to know that their congresswoman is going to support the president and not support impeachment,” said Snyder, who just launched her campaign to oust Slotkin in Michigan. “She kind of slates herself as a moderate, but now she’s really going with her left colleagues.”

Republicans are adamant that impeachment is a political winner for their party’s efforts to take back the House. The NRCC, along with House Minority Leader Kevin McCarthy‘s political team, released polling in battleground districts suggesting voters would punish Democratic members who impeach Trump over the Ukraine scandal. But public polling is less conclusive and suggests voters generally support the inquiry now underway.

Democratic candidates and party committees have been careful to avoid the appearance of politicizing the inquiry in an attempt to frame it as a decision made on members’ principles, but they could also experience a similar bump in energy and fundraising. The Democratic Congressional Campaign Committee reported a 240 percent increase from August to September in first-time donors via online and text.

And liberal donors could be motivated to react if they think Republicans are pulling ahead.

“I can see where they would be excited about seeing these metrics,” said Taryn Rosenkranz, a veteran Democratic digital fundraising strategist. “But I would also be surprised if my party wasn’t seeing that kind of same response in response to them. They have a surge, then we have a surge responding to their surge.”