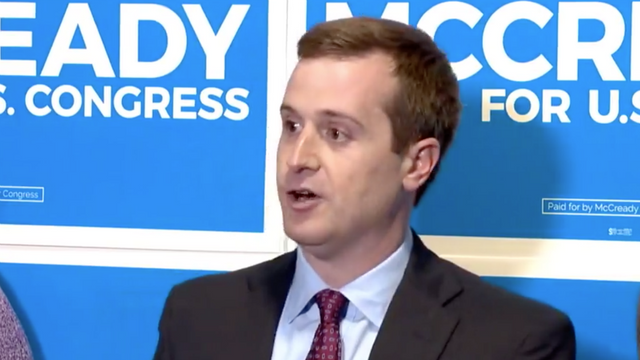 This is NOT the kind of headline Dan McCready wants voters waking up to. After McCready spent weeks trying to cover his tracks on sending jobs to China, the Charlotte Observer reports that his company’s investments have landed him in hot water for selling out American manufacturing.

Solar investments by a company co-owned by Democrat Dan McCready are drawing fire from Republicans, who accuse him of “sending jobs to China” and even exposing America to national security threats.

McCready, running in the 9th Congressional district, calls the accusations false and misleading.

The issues first raised in a Fox News article last month illustrate the complexities of navigating a global economy at a time of escalating trade disputes and security concerns. They’ve widened into a debate involving McCready’s 9th District opponent, two GOP campaign groups and lawyers on both sides…

He faces Republican state Sen. Dan Bishop in the Sept. 10 special election in the district that runs from Charlotte to Bladen County. Bishop and his allies have blasted McCready over the Fox News story.

At issue are investments made by Double Time Capital, a company started by McCready and partner Rye Barcott in 2013. In three years it raised $80 million from investors such as former Bank of America CEO Hugh McColl Jr., and the late Duke Energy CEO Jim Rogers.

The company invested in 36 North Carolina solar projects, according to the Charlotte Business Journal. Of those, 11 were owned by Durham-based Strata Solar, Brian O’Hara, a Strata vice president, told the Observer.

Strata is the largest solar company based in North Carolina, a state second only to California in solar capacity. McCready’s company made no investments in Strata itself.

Fox News reported that Strata bought Chinese solar panels, something the N.C. company itself acknowledged in a 2013 news release.

At the time American solar companies bought more than half of their solar imports — nearly $3 billion worth — from China, according to the Solar Energy Industries Association. Anti-dumping duties imposed in 2014 reduced China’s share to 11% of U.S. solar imports by 2017. …

Calvin Moore, a spokesman for the Congressional Leadership Fund, said, “The only thing worse than Dan McCready sending jobs to China and putting our national security at risk is that he refuses to tell the truth about it.”