The Washington Post’s Robert Costa “[Handel] has been boosted by House Speaker Paul Ryan’s affiliated super PAC, the Congressional Leadership Fund, they have poured money into this district they put people on the ground on the Republican side.” (MSNBC, 6/19/17)

Former Hillary Clinton campaign spokesman Brian Fallon “You have to give Republicans credit, they ran a good race, there was a lot of outside money that came in. Paul Ryan’s outside organization spent $6 million I think, and they ran a good GOTV campaign.” (CNN, 6/20/17)

Washington Examiner “Republicans turned to Nancy Pelosi to win in Georgia “Congressional Leadership Fund, also known as Ryan’s super PAC, invested $7 million in the Georgia race, $4 million in the runoff campaign that began on April 19. Handel needed the help; she raised $6 million total, far less than Ossoff’s more than $23 million. The group opened field office in Roswell, leafy community in the upscale, suburban Atlanta district, and deployed 100 paid field staff to knock on doors and drum up votes. They were joined by an additional 50 volunteers and overseen by CLF’s data director and deputy national field director.” (David Drucker, “Republicans turned to Nancy Pelosi to win in Georgia,” Washington Examiner, 6/20/17)

CLF Labeled As “Most Valuable Player” in GA-06 Race
Fox News’ Dana Perino “I would say ‘most valuable player’ should go to the Congressional Leadership Fund which is the third-party entity that raises a lot of money for these candidates.” (Fox News’ The Five, 6/20/17)

CNN Political Commentator Kevin Madden “The MVP of this campaign would have to be Paul Ryan and his Congressional Leadership Fund, those outside groups that knew this was going to be a battle of resources, just as much as a battle of ideas, came in and helped fill that void.” (CNN, 6/20/17)

Bloomberg News’ Margaret Talev “… It doesn’t matter unless you win, so you’re looking in the midterms they really have to focus on the right candidate and the right message, and staying away in the general election from being labeled a San Francisco liberal.” (CNN’s New Day, 6/21/17)

NATIONAL JOURNAL Handel’s Victory Shows Limits of Trump Card “One fi­nal note: The Paul Ry­an-aligned Con­gres­sion­al Lead­er­ship Fund su­per PAC played a pivotal role in lead­ing the op­pos­i­tion against Os­soff, set­ting the stage for a GOP mes­sage that from the out­set por­trayed the Demo­crat as a not ready-for-prime-time Pelosi aco­lyte. All told, the su­per PAC spent more than $7 mil­lion on the race. More im­port­antly, it showed that an out­side group can run a soph­ist­ic­ated ground game, identi­fy­ing tens of thou­sands of Re­pub­lic­an voters who didn’t par­ti­cip­ate in the first round of vot­ing but turned out en masse Tues­day night. The group’s ag­gress­ive play­book is be­ing rep­lic­ated in nu­mer­ous swing dis­tricts across the coun­try, and will be a force to reck­on with next Novem­ber.” (Josh Kraushaar, “Handel’s Victory Shows Limits of Trump Card,” National Journal, 06/21/17). 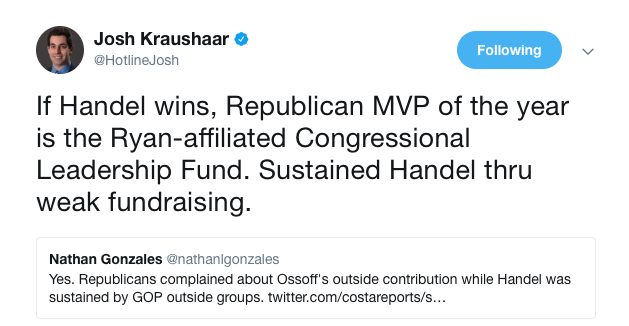