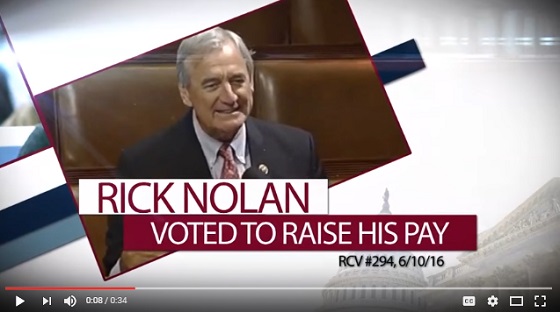 WASHINGTON – The Congressional Leadership Fund (@CLFSuperPAC), the super PAC founded by former Senator Norm Coleman (R-MN) and endorsed by House Republican leadership, released its fourth and final ad, “Takes Care of Himself,” against Congressman Rick Nolan (MN-08). The ad slams Nolan’s record of voting to raise his own salary while sticking Minnesotans with disastrous Obamacare.

“Rick Nolan has a service goal in Congress: himself. While Minnesotans see their premiums skyrocket and health care slashed, Rick Nolan looks at his fat pension,” said Ruth Guerra, CLF spokeswoman. “Rick Nolan is the epitome of an out-of-touch, Washington politician who has left middle-class families footing the bill time and again. It’s time to retire Rick Nolan.”

The ad will air broadcast and cable and online in the Minneapolis-St. Paul and Duluth media markets beginning Tuesday, November 1, as part of a $4.8 million independent expenditure campaign in MN-08 from CLF and its sister 501c4, American Action Network. CLF and AAN’s total announced general election spending to date is over $45 million in 32 districts nationwide.

In Congress, he voted to raise his own pay.

He’s got a fat pension, too.

And Medicare for seniors has been slashed.

We’re paying more and getting less.