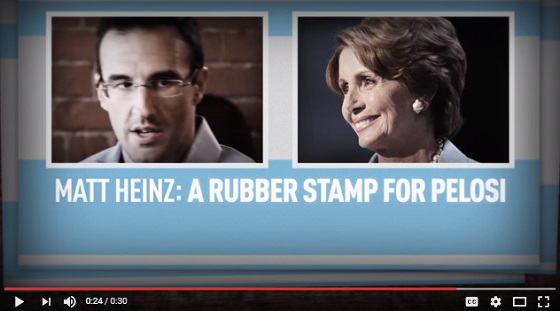 “Obamacare is on the verge of collapse, yet Matt Heinz continues to defend a law that has left Arizonans with fewer options and skyrocketing rates. Whether it’s because Nancy Pelosi supports Obamacare or because Heinz helped with its roll out, Heinz proves he is another rubber stamp for the status quo,” said Ruth Guerra, spokeswoman for CLF. “Arizonans need an independent, results-oriented leader in Congress like Martha McSally who will fight for their health and safety.”

The ad will air on Tucson cable, broadcast and online beginning Wednesday, October 26, as part of CLF’s $700,000 independent expenditure campaign in AZ-02. CLF and its sister organization American Action Network’s total announced general election spending to date is over $40 million in 32 districts nationwide.

That’s when he would become a rubber stamp for Nancy Pelosi and her agenda.

With its 700 billion dollars in Medicare cuts.

Worse, Matt Heinz defends the Iran nuclear deal, which could put Iran on a path to
nuclear weapons.

Matt Heinz won’t represent you in Congress. He’d be a rubber stamp for her.