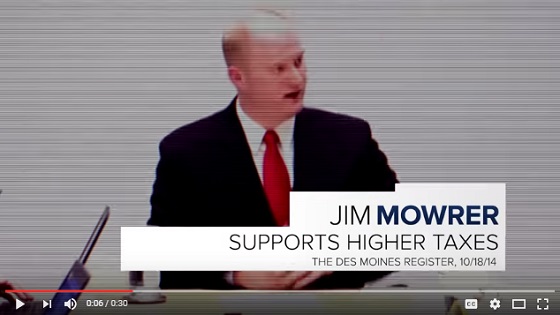 “It’s hard enough to make ends meet, but if Jim Mowrer gets his way, he’ll make things worse. Mowrer vows to double-down on higher taxes and onerous regulations that will further strain Iowa families,” said Ruth Guerra, spokeswoman for CLF. “Iowans deserve a leader like Congressman David Young who will work across the aisle to get things done, not a partisan rubberstamp like Jim Mowrer.”

The ad will air on Des Moines and Omaha cable and broadcast beginning Tuesday, November 1, through Election Day, as part of CLF’s now $1.8 million independent expenditure campaign in IA-03. A 15-second version will run on digital platforms. CLF and its sister organization, American Action Network (501c4), have announced total general election spending to date of over $45 million in 32 districts nationwide.

TREVER: When politicians like Jim Mowrer talk about higher taxes for others

RON: Mowrer supports the Death Tax making it almost impossible to pass my farm along to my kids.