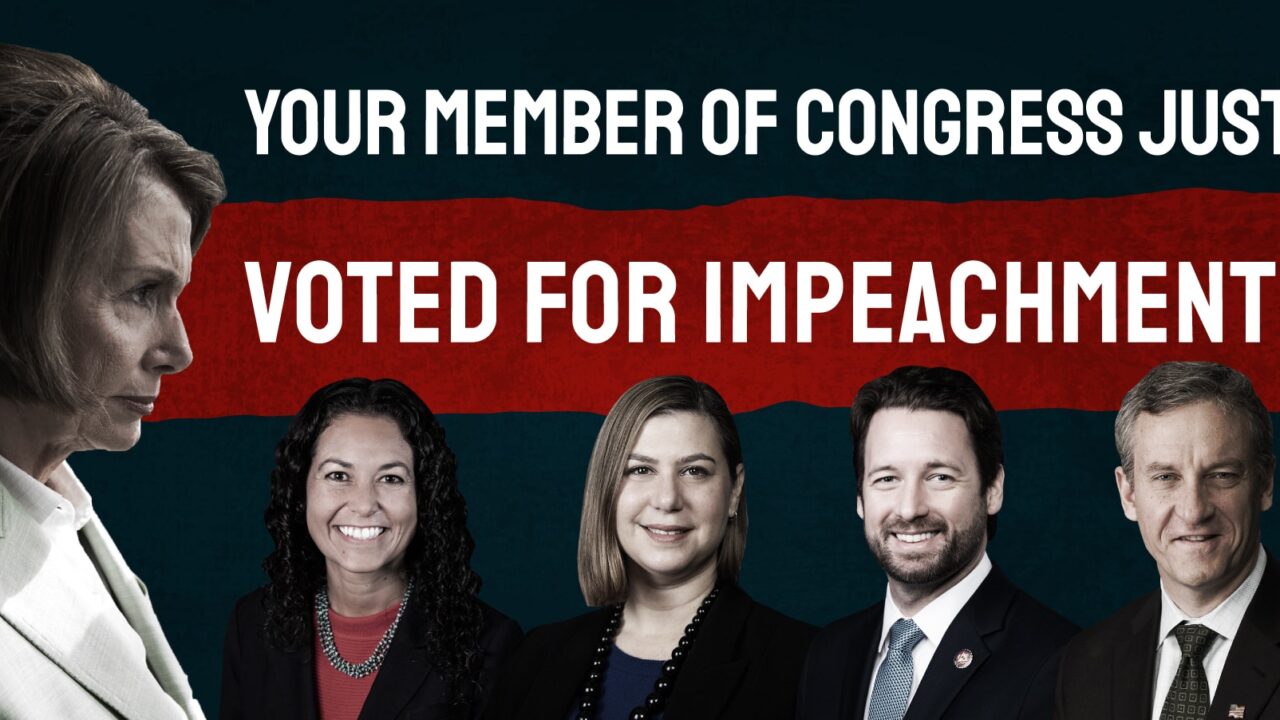 In case you missed it, Congressional Leadership Fund – the super PAC endorsed by House GOP Leadership – went up with new digital ads targeting all 29 Trump District Democrats who voted for impeachment yesterday. See highlights from press coverage as well as the new ads below.

BLOOMBERG: “The GOP didn’t waste any time trying to make hay of the House Democrats’ vote to begin an impeachment inquiry into President Donald Trump. Moments after the House’s 232-196 vote… a super-PAC that supports House Republicans began an online ad campaign targeting voters in the districts of 29 Democrats who represent areas won by Trump in 2016.” (“GOP Ads Target House Democrats on Impeachment,” Bloomberg, 10/31/19)FOX NEWS: “House Democrats in red districts who voted for the House resolution setting rules for the Trump impeachment inquiry are already under attack after a political action committee dedicated to boosting Republicans launched a digital ad campaign Thursday.” (“Republican PACs are already attacking vulnerable Dems who voted for impeachment resolution,” Fox News, 10/31/19)

“A boon to their efforts to retake the House”

CNN: “But beneath the display of party unity, many Democrats in competitive districts took pains to explain their vote, while Republicans boasted that it would be a boon to their efforts to retake the House … The Congressional Leadership Fund, a Republican Super PAC, announced on Thursday that it would air new digital ads against all 29 Democrats in those districts who voted for the resolution.” (“Vulnerable Democrats face new challenge following impeachment vote,” CNN, 10/31/19)

“Republicans plan to deploy the inquiry as a cudgel”

POLITICO: “Either way, Republicans plan to deploy the inquiry as a cudgel against Democrats who touted moderate messages and promises to work across the aisle in their 2018 campaigns. From a tactical standpoint, party leaders said the ongoing inquiry has helped them recruit candidates and boosted their small-dollar donations. … The Congressional Leadership Fund, a GOP leadership-aligned super PAC, released digital ads Thursday morning hitting 29 Democrats in Trump-won seats who backed the resolution and said those members would face “their constituents’ wrath” in November 2020.” (“Few Party Defections Among Vulnerable Members On Inquiry Vote,” POLITICO, 10/31/19)

“The ads underscored the complicated messaging for vulnerable Democrats”

ROLL CALL: “The ads underscored the complicated messaging for vulnerable Democrats when it comes to impeachment. The vote Thursday involved the process for opening the impeachment inquiry, not whether Trump should ultimately be impeached… But that clarification hasn’t stopped Republicans from attacking Democrats” (“Meet the two Democrats who broke with their party on impeachment,” Roll Call, 10/31/19)

BLOOMBERG: “The 232-196 vote on Thursday blessing the inquiry, without any Republican support, put many Democrats from districts won by President Donald Trump on the spot by forcing them to decide whether to back an investigation that’s all but certain to result in impeachment. It’s a vote Republicans hope to capitalize on a year from now when those Democrats face re-election. … the Congressional Leadership Fund, a GOP super PAC, said it’s launching a digital ad campaign targeting 29 Democrats from Trump districts who were key to their party winning the House majority in 2018. (“Pelosi Goes All-In on Impeachment But Now Must Win Over Public,” Bloomberg, 10/31/19)