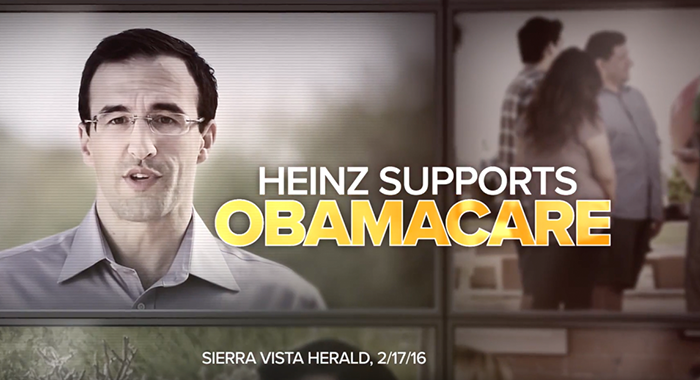 “Matt Heinz may talk a smooth game in Arizona but from Obamacare to raising taxes, his policy positions are part of the problem that many Arizona families face,” said Ruth Guerra, spokeswoman for CLF. “Arizonans deserve a proven, results-oriented leader like Martha McSally who will stand up to harmful policies like Obamacare.”

The ad will begin airing Wednesday, October 19, on Tucson cable and broadcast TV. A 15-second version of the ad will run on digital platforms. CLF will spend over $700,000 on TV and digital advertising in the AZ-02 race in the final three weeks of the election. CLF and its sister 501c4 American Action Network have announced general election spending of over $40 million in 32 districts nationwide.

HEINZ: Do no harm. That’s the oath I took as a doctor.

ANNCR: Matt Heinz says do no harm, but he supports Obamacare.

Which harms seniors by cutting Medicare,

And harms Arizonans with skyrocketing premiums.

HEINZ: Do no harm.