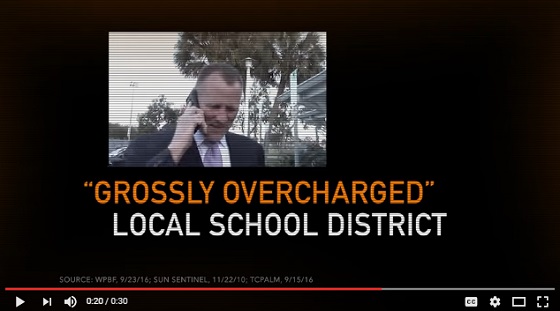 “Whether it’s grossly overcharging a school district or refusing to reveal his profit from a half-a-billion-dollar-government contract, Randy Perkins proves his priority is protecting his bottom line,” said Ruth Guerra, spokeswoman for CLF. “Floridians deserve a leader like Brian Mast who has placed service above self, time and again – not a thin-skinned, shady businessman like Randy Perkins.”

The ad will air on West Palm Beach cable and broadcast beginning Tuesday, November 1, through Election Day, as part of CLF’s $3.5 million independent expenditure campaign in FL-18. Additionally, a 15-second version will run on digital platforms. CLF and its sister organization, American Action Network (501c4), have announced total general election spending to date of over $45 million in 32 districts nationwide.

ANNCR: How much is enough?

MR. PICKERING: Mr. Perkins, on your $500 million contract, what is your profit on that?

RANDY PERKINS: I am not going to divulge my profit margin.

And a local school district even accused his company of grossly overcharging them hundreds
of thousands of dollars.

Randy Perkins. Looking out for his bottom line, not ours.