WASHINGTON – In a desperate attempt to prevent Virginia voters from learning about her record and background, Virginia’s 7th Congressional District Democratic nominee, Abigail Spanberger, today sent a letter to the Congressional Leadership Fund (@CLFSuperPAC) – which her campaign then shared with select members of the media – threatening legal action over information about Spanberger that was obtained through legal channels. CLF is responding by releasing a copy of that letter to voters in Virginia’s 7th Congressional District as well as documentation from the Freedom of Information Request (FOIA) and the records that were obtained from the United States Postal Service as the result of that request.

This included information about Spanberger’s tenure working at the Islamic Saudi Academy in Northern Virginia, which the Associated Press reported was dubbed “Terror High” after 12 U.S. Senators and a federal commission wanted to shut it down. Spanberger’s former employer produced a number of well-known terrorists including Ahmed Omar Abu Ali, valedictorian of the academy in 1999, who was convicted in 2005 on charges of providing material support to the al Qaeda terrorist network. He was sentenced to 30 years in prison. This led U.S. Senate Democratic Leader Charles Schumer to issue a press release in 2005 calling for a full-scale probe of the controversial Islamic school and questioning whether the Islamic Saudi Academy was “another madrassa.” In addition, CLF is redacting the document to exclude personal information such as home addresses, telephone numbers, dates of birth and social security numbers, even though this information was released by the USPS as part of the response to the FOIA request. 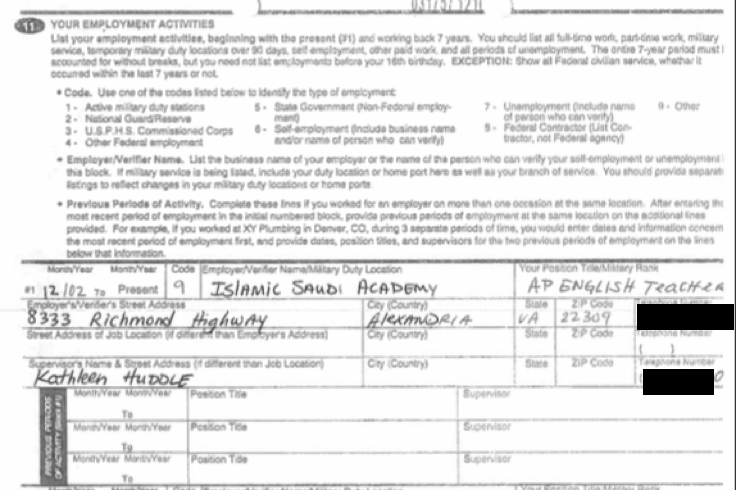