President Biden will deliver the State of the Union today, and according to polls, it’s not good, folks!

CBS has new polling out today that shows Democrats have lost the American people on every issue from foreign policy to the economy. 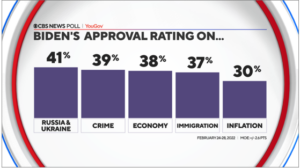 No wonder CNN reports “Democrats are staring down an electoral catastrophe,” and Democrats keep retiring faster than we can vote them out.

“Americans are rejecting Democrats’ weak leadership that’s created new disasters on every front,” said CLF Press Secretary Cally Perkins. “Democrats’ one-party control has left families worse off and has shown voters why they simply cannot trust the left to get America back on track.”