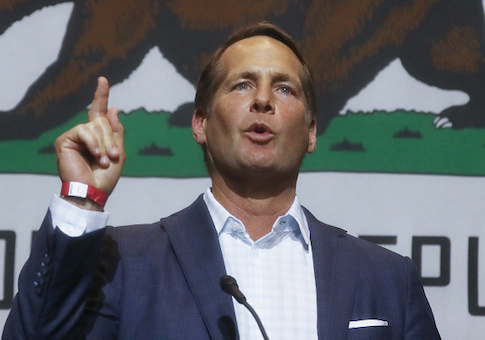 Polling out today shows Congressman Harley Rouda is in big trouble for 2020. Just 9 months on the job and already Harley Rouda is tied up in the polls against top GOP challenger, Michelle Steel. Meanwhile just 28% say they want to re-elect him to Congress.

A truly terrible place to be for any incumbent hoping to get re-elected.

The Democratic tidal wave that washed over California last fall turned Orange County blue, but there are hopeful signs for Republicans that the floodwaters are receding.

The congressman, who defeated 15-term incumbent Rep. Dana Rohrabacher in one of the most closely watched House contests last cycle, has yet to make a firm impression in the district, the figures also show. Forty-two percent of voters in the district say they don’t know who Rouda is or have an unfavorable opinion of him, while just 30% have a favorable opinion.

The survey was conducted by TargetPoint Consulting on behalf of the Congressional Leadership Fund, a GOP super PAC devoted to electing House Republicans. The poll was conducted Aug. 10-11 and has a margin of error of plus or minus 5.3 percentage points.

It’s never a good sign when an incumbent lawmaker is polling dead even with a challenger a year ahead of an election. And Republicans believe the numbers also demonstrate the strength of Steel’s candidacy, considering all the headlines over the last month about Democrats surpassing Republican voter registrations in the once conservative bastion of Orange County.

The district went for Democrat Hillary Clinton in 2016 by a margin of 1.7 percentage points with Clinton winning statewide in California by 30 points.

Steel, an Orange County supervisor, is one of three Asian American Republican women running for Congress in California.