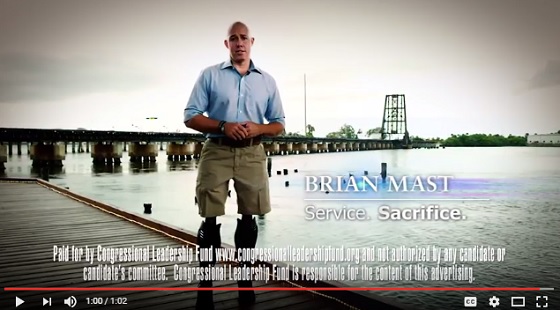 “I hear the explosion, I see the plume of smoke, I hear the yell of ‘medic’…”

In a new CLF ad out today in the FL-18 congressional race, a former Army medic recounts an IED explosion, his discovery of double-amputee combat veteran Brian Mast’s injuries, and what he thinks of Democrat Randy Perkins’ insults:

One sacrificed for us. The other serves himself. This :60 TV ad will be followed by a :30 TV version and :15 digital version. This is CLF’s third ad in the race as part of a $3.1 million campaign.

And more new TV ads are popping every day. So here’s a Friday rewind of the ads CLF has launched on the airwaves this week:

The ad begins CLF’s $1.3 million campaign in the race by exposing Democrat Gail Schwartz’s votes to allow violent criminals to be eligible for “good behavior time,” which resulted in reduced sentences and early release of hardened criminals. The ad will air on Denver broadcast and cable beginning Friday, October 21.

CLF’s second ad in the TX-23 race exposes Pete Gallego as the ultimate political insider who is looking to rub elbows with Washington elites rather than fighting for Texans. The ad began airing on San Antonio broadcast and cable on Thursday, October 20, as part of CLF’s $2 million independent expenditure campaign in TX-23.

The ad kicks off CLF’s $2 million campaign in the CA-10 race by slamming Michael Eggman’s dangerous stance on foreign policy while tying him to the unpopular Democrat presidential candidate Hillary Clinton. The ad began airing on broadcast, cable and online in the Sacramento media market on Wednesday, October 19.

The ad begins CLF’s $700,000 campaign in the race by exposing Matt Heinz’s empty rhetoric, promising care but instead standing for harmful policies like Obamacare and tax hikes that make Arizonans pay more for less. The ad began airing Wednesday, October 19, on Tucson broadcast TV. A 15-second version of the ad is running on digital platforms.

CLF begins its $2.2 million campaign against Steve Santarsiero with the ad “Pork.”  The ad spotlights Steve Santarsiero’s record for taxing Pennsylvanians and then wasting their money on pork barrel spending and secret pet projects. Pennsylvanians can smell the stench of Steve Santarsiero’s tax-raising record on everything from gasoline prices to property taxes. The ad began airing Tuesday, October 18, on Philadelphia broadcast and cable TV. A 15-second version of the ad is running on digital platforms.

CLF kicked off its $950,000 campaign against Congressman Brad Ashford with an ad that exposes his wasteful spending record, lighting up tax dollars on one hand while trying to line his pockets with them on the other. Brad Ashford likes to pretend he’s for fiscal responsibility, but his record shows he burns through tax dollars with reckless abandon. The ad began airing Tuesday, October 18, on Omaha broadcast TV and digital platforms.

CLF’s second ad against Democrat Colleen Deacon builds off CLF’s first ad by using her own words to prove she is extremely unprepared to confront the grave threats facing our nation. When it comes to our nation’s security, Colleen Deacon doesn’t know the answer. The TV ad began airing on Syracuse broadcast and cable beginning Tuesday, October 18, as part of CLF’s $800,000 independent expenditure campaign in the race.

In this second ad against Congressman Rick Nolan, the spot exposes Nolan as a self-serving politician who failed, time and again, to fight for the men and women in uniform. Our troops stand up for us at home and abroad, yet Rick Nolan dishonors them by voting against their healthcare and pay. The ad began airing on broadcast, cable and online in the Minneapolis-St. Paul and Duluth media market on Tuesday, October 18, as part of CLF and AAN’s combined $4.5 million campaign in the race.

CLF’s first ad in the race highlights Jim Mowrer’s dangerous stance on issues of national security. Whether it’s his support for the dangerous Iran nuclear deal or bringing thousands of refugees from ISIS war zones into the United States, Jim Mowrer’s views are too dangerous.  The ad began airing on broadcast and cable in the Des Moines media market on Tuesday, October 18, as part of CLF’s $1.5 million independent expenditure campaign in IA-03.

In this third spot against Democrat Zephyr Teachout, the ad minces no words in calling out Teachout’s blatant hypocrisy as she pushed to raise taxes on New Yorkers while underpaying her own taxes by thousands of dollars. The ad went into rotation on Monday in CLF’s existing New York City cable buy as part of CLF’s $2.7 million independent expenditure campaign in NY-19.