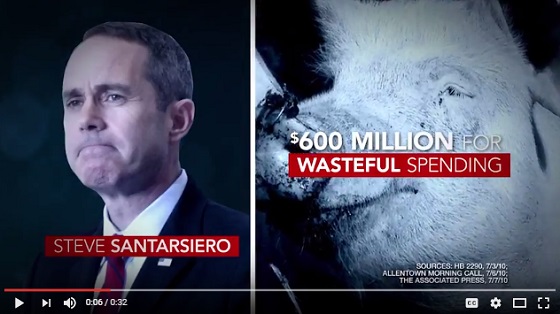 Whether as town supervisor or state representative, Steve Santarsiero has laid waste to fiscal sanity, voting to borrow over $600 million and raise taxes on working families to fuel pet projects and profligate spending.

The ad will begin airing Tuesday, October 18, on Philadelphia broadcast and cable TV. A 15-second version of the ad will run on digital platforms. CLF will spend over $2.2 million on TV and digital advertising in the PA-08 race in the final three weeks of the election. CLF and its sister 501c4 American Action Network have announced general election spending of over $33 million in 29 districts nationwide.

ANNCR: Got pork? Steve Santarsiero does.

He voted to borrow 600-million for wasteful spending, including pork barrel projects like
buildings for politicians.

And supported walking around money for legislators to fund secret pet projects.

How did he pay for it?

And as town supervisor, voted for record property tax increases.